A Sculptor, a Painter, a Poet 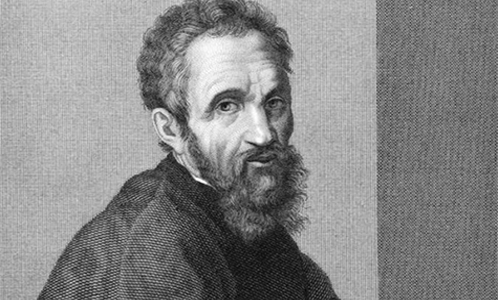 The Pope’s desire to embalm Michelangelo di Ludovico, so that he would be eternal, could not come to manifestation. But, preserved in our memories are the lofty plinths of this genius and the self characterizing narratives of this colossus. They deserve a mention in every age, over every sipped renaissance discussion.

This is a memorable recollection from the past, and we feel honored with the conferred opportune, revisiting the life of a sculptor, a painter, a poet – a glad surrender to Michelangelo, the man himself.

The Sculpting of a Great

Born in the Tuscan town of Caprese on March 6th 1475, Michelangelo di Ludovica Buonarroti Simoni, was the second oldest of six children. Soon after he moved to Florence with his family, his mother passed away. Subsequently, the Buonarrotis placed him in the care of a wet nurse, who lived miles away in Settignano. The Michelangelo of old later remarked this decision as an important event of his sculpting great—the wet nurse’s husband and father, both were stonemasons.

“With my wet-nurse’s milk, I sucked in the hammer and chisels I use for my statues.”

During his three year apprenticeship, young Michelangelo exhibited the signs of his promising potential. Ghirlandaio, his master, acknowledged:

“This Michelangelo knows more than I do.”

The artist’s talent invited the attention of Lorenzo de Medici, the then effective ruler of Florence. Michelangelo spent his next two years in the Medici household, sculpting his early masterpieces – the Madonna of the Stairs and a marble relief of Battle of Lapiths and Centaurs.

The Troubled Employment and the Man’s Spiritual Self​

Michelangelo’s allure for divine spirituality, inspiring some of his famous artworks, can be attributed to his unsophisticated Catholicism upbringing in the cultured traditions of Florence. He would attend Mass in the Franciscan church of Santa Croce, and read and listen, the writings and sermons of Savonarola.

Therefore, when he got the invitation from Pope Julius II to work on one of his commissioned works, he duly obliged – it invoked his religious self.  ​

Unto this point of his artistic journey, Michelangelo had worked on vast array of works commissioned by Piero de Medici and Jacopo Galli, which included the famous Sleeping Cupid, Bacchus, Pieta and the magnificent statue of David.

“Bulging with veins, the right hand is holding what remains of a terrible weapon used in antiquity until the 17th century, which perfectly captivates in its marble illustration the events from the Bible” art historian Sergio Risalti commented on the statue of David, while paying tribute to Michelangelo’s holy inspired artistic spirit.

Pope Julius II entrusted him with the responsibility to create a shrine for him with over forty statues. The scope of the project, aligned with Michelangelo’s vision, and so, he immediately set out to work. But, the shrine soon became a secondary concern for the Pope, while Michelangelo continued to show complete devotion and commitment to it.

The project of the temple underwent delays as Julius’ focus turned towards a rebuild of the church of St. Peter’s in Rome, and eventually the Pope lost interest in the shrine.

Despite the disdain that his art had just received, Michelangelo agreed to work for the Pope on redecorating the Sistine ceiling of the Chapel. For him, his allure for the divine spirituality meant more. By 1512, the ceiling was finally completed and today, the great artistic masterpiece continues to enthrall the audiences with around 5 million people visiting the Chapel every year.

“The fresco cycle as a whole radiates a powerful and sometimes oppressively strong sense of introspection. Looking at it feels almost nothing like looking at the real world. It feels, instead, like looking inside the mind of the man who created it. The pictures of the ceiling stunned and impressed the artist’s contemporaries not only because they were so accomplished but also because they were so deeply unorthodox and original“,  Graham Dixon writes in his book, describing his first viewing experience of the majestic Sistine ceiling.

After the death of Pope Julius II, what followed was a political blood bath, amidst which Michelangelo continued to work on a number of other religiously inspired projects for Pope Clement VII and Pope Paul III. It was during this time that he painted his famous Last Judgment, which was completed in 1541.

Michelangelo – More than Just a Painter and Sculptor

Michelangelo is also considered to be an accomplished poet, producing more than three hundred works of literature, which still exist today. His poetry makes animating use of wordplay focusing on the subjects of love, ecstasy, lust and loyalty.

But, nothing inspired his pieces more than the element of beauty. Ascanio Condivi, the artist’s other contemporary biographer, writes:

This was well exhibited in his literature works and especially the sonnets that Michelangelo wrote to a beautiful young nobleman Tommaso Cavalieri, allegedly believed to be his lover.

Explosive tempered? Probably, as his servants would testify. However, that could be defined more of a byproduct of his turmoil surroundings in which he was working. After the death of Urbinho, his faithful servant, Michelangelo looked after his family – which reveals a lot about his considerate self.

A recluse? Definitely not! As he had large circle of friends, and even though he grumbled about them frequently, he was also very fond of them, especially the noble Vittoria Colonna who was his spiritual advisor.

A destitute artist? Evident from his plastered-off, dirty clothes. However, in reality he was everything but. When he died, Michelangelo owned many properties and was worth 50,000 gold ducats.

How we wish that the Pope’s desire could have indeed been fulfilled.

How we wish, the remains of the great Michelangelo di Ludovico Buonarroti, who departed from this world on 18th February 1564, could have indeed been embalmed.

How we wish it was not us but Michelangelo, the man himself, who could have delved into the riches and antiques of his ever present existence.  ​

A Present from the Present