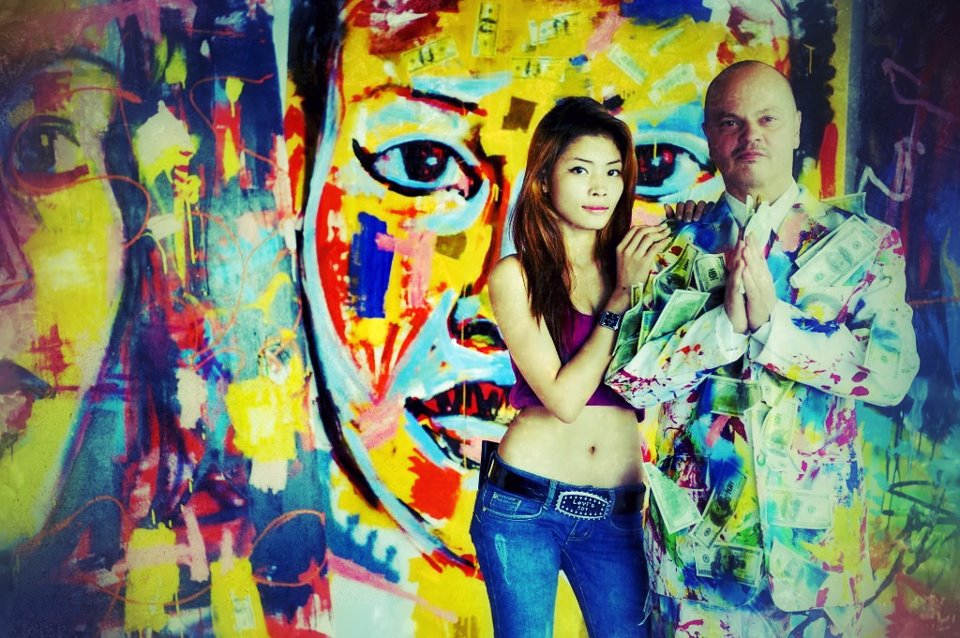 Grace H. Gutekanst interviewed Peter Klashorst, an anti-dogmatic artist travelling between three countries and selling art around the world. Upon first meeting him at his studio in Phnom Penh, Cambodia, he greeted Gutekanst in tiny boxers and tiny boxers alone. However, his intelligence and view of the world is outstanding. Klashorst keeps up with world news and pop culture daily and incorporates the tragic insanity of society into his artwork.

Can you tell me a little bit about you?
I came to Phnom Penh when I was 21. I was invited to do an exhibition in the regime and I kept hanging on.

What medium do you usually use?
I have three studios, one in Africa, Bangkok, and here. I work mainly with local materials so it is hard to get classic materials like linen. I work mostly with industrial paints and spray paints. In Bangkok I can work with oils and canvas… and Africa is another story. It depends on what materials I can get my hands on.

Do you locate between studios?
Yes, I travel around so usually about 2 weeks Bangkok, 2 weeks in Phnom Penh, and then one or two months in Africa.

What is your style/influence?
I am influenced by children, drawings, Rembrandt, and everything in between, cartoons, comics, animations, classical sculpture, Khmer sculpture; I am anti-dogmatic. I don’t have a style. I don’t believe in a recipe… I wake up in the morning and think, “What shall I do?” I look at the internet. Like this morning, I see the GOP debate and Mr. Trump sort of emphasizing the size of his penis, so I thought let’s make a cartoon about that. I never know what comes out. I let my imagination run wild and there’s no holding back. I don’t say that I cannot do this because it is outside of my style. I don’t have a style. I look at a painting of Da Vinci and try to paint like Da Vinci or I look at Rembrandt and try to be Rembrandt, but of course I am not him. Meanwhile I believe in free expression so I do everything I want. Most importantly it’s about freedom; it’s about liberty; express yourself and let yourself go. Even porn inspires me.

Do you paint every day?
Yeah, every day. I have been painting so much for the last few days because I sniffed too much coke. No, no I just made about 300 paintings for a collector last week, so I had overdone it a little bit, you know? Normally, most painters wouldn’t do that. For me it’s like a hallucination; a catharses; throwing every idea that comes into my mind.

How do people contact you?
Everything goes through Facebook, like 99%. It’s fascinating because I used to go to gallery shows myself or try to get an exhibition show or invited to places, but now that’s all gone. Every day you can do a show on Facebook. You can do a new exhibition. You don’t need to have a physical exhibition any more. You can reach an enormous amount of people. Sometimes about 20,000 people look at one photo; one picture. In a gallery, if ten people a day come by then that’s good, but 20,000 on Facebook- that’s crazy! And it’s all over the world from Saudi Arabia to Africa to Asia, America, and Europe. That’s fantastic! You can reach so many people with your pictures. That is totally different from a couple of years ago. I am using that vehicle as a way to promote my work.

And you’ve always been an artist?
Yes, always. As a child, ever since I was existing, I was an artist.

Do you ever collaborate with other Cambodian artists?
Very little here. In Africa, I have been working with other artists a lot. Sometimes they even copy my work and sell it. *laughs* …here not so much. In Bangkok, I was working with several artists, but in Cambodia I don’t know as many Cambodian artists. Most of the artwork I see is very into the tourist thing, you know? There are a few galleries here, but the work to me is not so interesting.

Do you have a favorite painting you have ever done?
I am going to do it tomorrow. No, I don’t have a favorite. Sometimes the worst paintings are the best. It is something you see later on. I am also a writer. Sometimes I really hate my writing, it’s terrible and then a few years later they wanted to reprint one of the books. When I look at it now, it’s not that bad. It is with painting too, sometimes you are angry and make something and hate it. Then a few years later and suddenly you are in a different mood and it looks different. It happens to everyone. Like if you don’t like a movie and a few years later you like it.

How does your writing influence your painting?
I have always been writing, painting, and making music. I have always been doing the creative thing. I went to movie school and studied movies. So now I am working on a new book and combine everything because of technology now. I combine the move aspect, the writing, the animation, drawing, and paintings. I want to make an app. The book is not a physical book but an app book.

It is really neat how you go with the flow of technology and how it’s advancing.
Yes, now you can do it in a more spontaneous way. You can take a picture and draw it in your book, you know? You don’t have to look for a picture or film fragment. The problem before was having to look for all the things and put them together, but technology helps make it more spontaneous. Then it becomes more natural and intended. That is possible nowadays.

I know a lot of artists who are opposed to technology and I love that you use it to your benefit.
Yes, I love both sides. What I love about painting is that it is so primitive and so direct in a way. Painting is one big accident; it’s one big mess. It’s very physical, and then on the other side you have technology for writing and researching. I like both sides of it. First thing in the morning, I wake up, get my ipad, and look at the news and make drawings on the ipad. You can also take an ipad and write at the beach or the bar; before you needed a type-writer.

Can you tell me about that big painting you have in your studio?
So it’s about all those things that happened in Gaza. It’s an apocalyptic vision of our world. It is one of the riders of the apocalypse, one of the four horse men. Also it’s a self portrait; it’s me on the horse. It incorporates death and destruction. It’s McDonalds coming down and lots of red. Also one of the guys in the painting is killed by Isis; Muslims with a head rolling somewhere. It’s about all the things that irritate me but are also a part of our lives. The noose is the reality.

What would you like to see art wise in Cambodia?
The idea was for me to be the first artist at the National Museum and lots of other artists would follow, but that didn’t happen. It is a beautiful museum with a lot of space. The whole subject is very heavy of course, but I think it would be good to continue that idea. To have artists react to the Khmer Rouge period but also talk about the present. Nowadays people are still being tortured and killed but nobody ever learned anything from it. It would be great if there were more galleries and openings about art. I think art is a very good way to change people’s ideas. I think it would be better to bomb Iraq with artists then to bomb with bombs. Parachute a thousand artists and find out what will happen. It would be better than to put a thousand soldiers there because of this whole Isis thing. A lot of these things happening are all ideas and you cannot pull them out of people. If you kill someone, the idea isn’t gone. I mean they killed Bin Laden but his ideas are still in Iraq. So you have to change ideas from within and art is one way to look at the world in a different way and surprise people. The world is filled with crazy artists, but aren’t we all crazy too? Be free more.

And He Is Back